Greeks celebrate the Anniversary of the National Polygenesis of March 25, 1821, which this year coincides with the completion of 200 years since the Greek Revolution of 1821. On this day, we pay tribute and gratitude to our heroic ancestors, who kept with their struggle, through the centuries, the flame of the Nation. We honor the heroes of 1821, who made the dreams and hopes of all previous generations come true, securing for us, among other things, the two supreme goods: our independence as a nation and our freedom as a people.

The events will take place again this year in the Region of Central Macedonia with all possible splendor and formality, despite the cancellation of all military and student parades, due to the outbreak of COVID-19.

On Tuesday, March 23, a huge banner will be hung at the City Hall of Thessaloniki, referring to the 200 years since the Greek Revolution. Also, two flags of the Revolution of 1821 will be hung on the masts of the town hall: The Flag of the Kolokotronians, which is perhaps the most widespread flag of the Greek Fighters, as well as the Flag of Emmanuel Pappas.

On the day of the national anniversary, at 11.00 in the morning, the action of the Municipal Gallery "Animating the paintings" will be shown. For its implementation, five emblematic works of the Greek Revolution have been selected: "The Massacre of Chios" and "Greece in the ruins of Messolonghi" by Eugène Delacroix, "Greece Grateful" by Theodoros Vryzakis, "The Sacrifice" by François - Ilemile de Lasanc and "Greek women beg the Virgin for help" by Ary Scheffer. The images of these works have been printed on large banners, in front of which actors in the same costume represent the central form of each work (tableaux vivants).

On the afternoon of March 25, the date, the message of the Revolution of 1821 and the image of a Greek Fighter will be illuminated on the surface of the White Tower. Anniversary tributes have also been prepared by the municipal media. 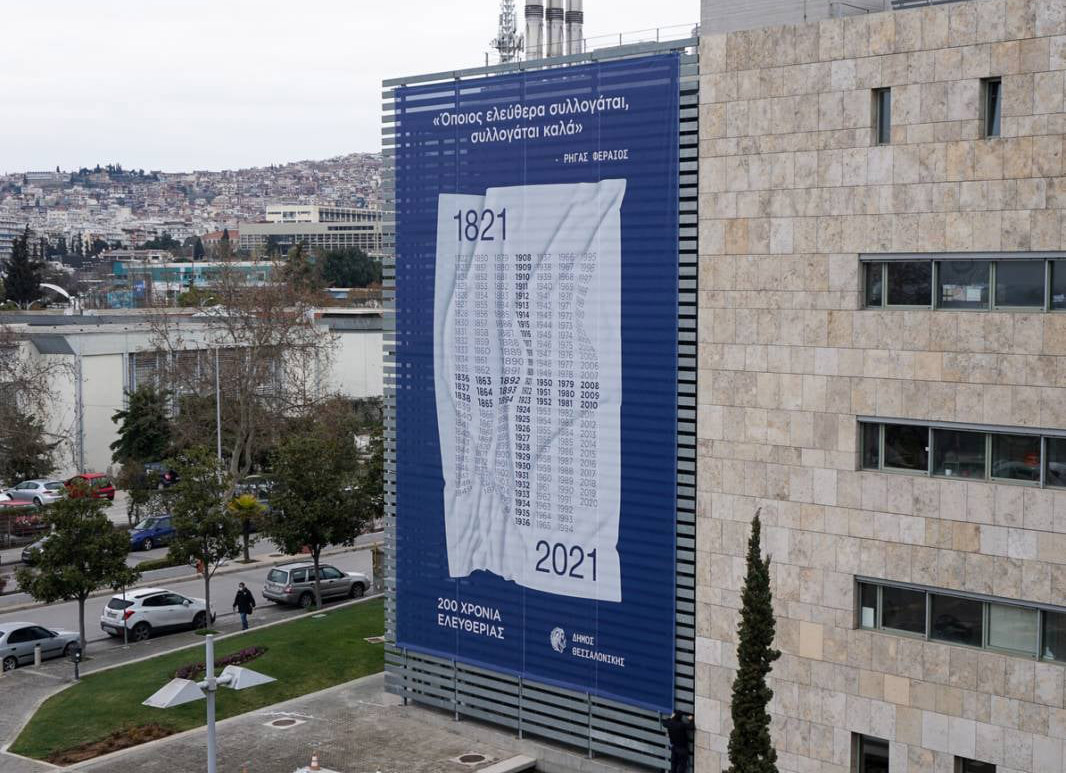 The entire world will turn Greek to mark Greece’s bicentennial, celebrated on March 25, 2021, commemorating 200 years since the declaration of its War of Independence. Iconic landmarks all over the world will be illuminated in blue and white in honor of the Greek people and their struggle for freedom 200 years ago.

San Francisco City Hall will be illuminated with the colors of the Greek flag on March 25.

The City of Los Angeles will mark the celebration of the Greek bicentennial of its War of Independence on March 25 by illuminating the iconic pylons outside its international airport, LAX.

The Santa Monica Pier’s “Pacific Wheel” will also have a special, evening-long Light Show for Greek Independence Day on the 25th.

Greektown Chicago is hosting a free virtual celebration of the 200th anniversary of Greek Independence Day on Thursday, March 25 at 7 pm CST (8 pm Eastern Time). The festivities will include a special performance from popular Greek singer Glykeria of the song “Να ‘τανε το ’21” (“Let it be ‘21”), which commemorates the beginning of the Greeks’ fight for independence in March 1821. The event will be streamed on the Greektown Chicago Facebook page.

A series of important landmarks in Ontario, Canada, will glow in the blue and white on March 24 and 25 as well. Οn Thursday, March 25, following the sunset, at approximately 7:36 pm, the iconic CN Tower in Toronto will be illuminated. The ceremony will be broadcast live on the official CN Tower website.

The illumination of this wonder of nature, shared between the US and Canada, will take place on Thursday, March 25, from 9:45-10:00 pm EST. The ceremony will be broadcast live on the official Niagara Falls website (no password required).

The City of Vancouver, British Columbia, will honor Greek Independence Day by raising Greek flags in varied municipalities; most notably the raising of a total of 56 Greek flags on city property.

The New South Wales government agreed that the iconic Sydney Opera House will be bedecked in the Greek flag for March 25, the Bicentennial of the War of Independence. The blue and white will also fly proudly in various locations across Canberra.

The Hellenic Federation of South Africa (HFSA) will also celebrate several commemorative events in Johannesburg, South Africa on March 25. The largest (1,500 square meter/16,146 square feet) thread-sewn Greek flag ever produced will be flown as part of the celebrations. A large-scale “Greek Freedom Dance” was choreographed to an original composition produced by one of the Greek South African community’s Greek scholars as well.