Thessaloniki is an open Museum of Early Christian and Byzantine Art. In 1988 the UNESCO declared World Heritage Sites 15 of the 'finest monuments' of the city, representative samples of this period of its history. We summoned up these monuments in the thematic 'UNESCO Monuments Route' to include them into your own list!

One of the town’s oldest churches was built in 1310 – 1314 under the sponsorship of Patriarch Nephon I. It used to be a katholicon [main church] of a monastery dedicated to Theotokos [Mother of God] as shown by the mural depicting Theotokos and the Founder, as well as by the iconography on the aisle with images of the Holy Virgin’s life. Out of the original monastery complex, -apart from the katholicon – there remain the portal to the southwest and the cistern to the northwest. It is a complex tetrastyle cross-in-square church with a narthex and a peristyle on the three sides and extremely symmetrical proportions. When it was converted into a mosque, during the Turkish rule, the murals and mosaics – outstanding specimens of Palaeologan art dating to the 14th c. – were covered by plaster and a minaret was added to the southwestern side.

It is located on the SW side of Dikastirion Sq. [Law Courts Sq.]. It was built in 1128 on the site of an ancient temple of Hephaestus or Kaveiros. It is a representative specimen of the architecture of the “School of Constantinople” and was thus named because of the area it was built on, known as the district of coppersmiths (masters of copper – chalkos). The most prominent feature is the level above the narthex. In 1430 it was converted into a mosque and was named Kazancilar Camii.

It was founded in the second half of the 5th c. on the site of the roman public baths and it was dedicated to Panagia (Virgin Mary). It is a three-aisled, timber-roofed basilica with a narthex and a gallery. The nave is separated by the side aisles with colonnades of Theodosian style pillars and impost capitals made of marble as is made the floor of the nave. The preserved mosaic decorations date to the 5th c. whereas the murals on the south aisle date to the 13th c. After the city was captured by the Turks, this was the first church to be turned into a mosque. In 1922-1923 it housed refugees from Asia Minor and in 1939 Christian worship was once again practiced in it.

It was built in the mid-7th c. on the ruins of a 5th c. basilica, as a copy of Hagia Sophia [Holy Wisdom of God] in Constantinople, and is one of the most important early Christian monuments in the Orthodox world. It is a cross domed basilica and used to be the Metropolitan Church (Cathedral) until 1523 when it was converted into a mosque; it was restored to Christian worship after 1912. The capitals date to the 5th – 6th c. (they were part of the older church); the wonderful mosaics are an absolute must-see, particularly the ones on the dome with the image of the Ascension of Christ, as are the murals crafted in different stages from the 8th to the 11th c. In the church’s south side, amid green surroundings you will find the church of Agios Ioannis Prodromos [St. John the Forerunner] (1940); from this point you will enter the early-Christian baptistery (catacomb) of Agia Sofia, built on the ruins of roman baths.

It is located on Egnatia Street almost between Kamara and the Palace of Galerius). Construction took place possibly around 1340 and it is a typical example of the transitional type in Byzantine church-building, found particularly in Macedonia. Fine depictions of the Ascension of Christ, the Prophets and the Divine Liturgy decorate the dome 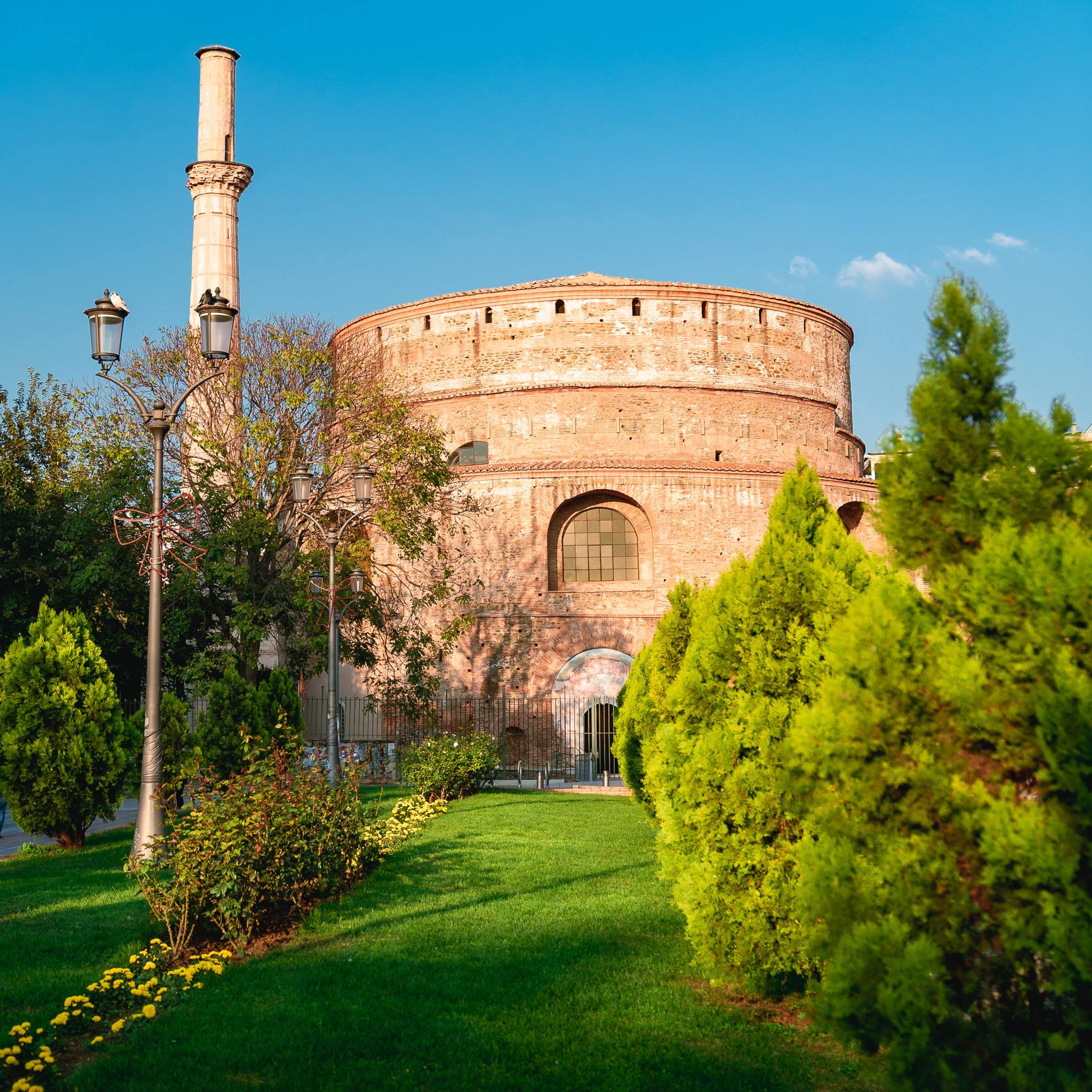 This impressive round building lies on the route connecting the triumphal arch of Galerius (Kamara) and the Palace of Galerius. It has a diameter of 24.5 m. and its gigantic dome is 30 m. high. It was built in 306 AD by Galerius, probably as a temple of Zeus or Kaveiros or as a mausoleum; in the 5th c. it was converted into a church dedicated to the Holy Bodiless Powers. The 5th c. outstanding preserved mosaics impress with their variety of themes, their naturalistic rendering, the colour diversity and the brilliance of the gold and silver tesserae. In 1591 it was turned into a mosque when a towering minaret was added, which survives today. In the square, next to Rotunda, lies the small church of Agios Georgios [St. George] whence the monument took its other name; there are also many cafés and bars. In the adjoining Melenikou st. you will see segments of the town’s eastern walls.

It is on Iasonidou st., pretty close to Rotunda. According to certain scholars, this was the main church of the Monastery of Kyr Isaac or Theotokos Perivleptos, founded by Jacob, the Metropolitan Bishop of Thessaloniki (1295-1314). It is a tetrastyle cross-insquare domed church with a surrounding portico ending to the east in two chapels. During the Turkish Occupation it was changed into a mosque under the name Ishakiye Camii (the mosque of Isaac). Remaining murals date to the 13th – 14th c. and depict saints and prelates as well the Virgin Mary.

It is the best-known Byzantine church of the town as Agios Dimitrios [St. Demetrius] is Thessaloniki’s patron saint. It was built during the 7th c. on the ruins of a 5th c. Basilica and in 1493 it was converted into a mosque. It was destroyed in 1917 by the fire but it was restored and reopened in 1948. It is a five-aisle transept basilica with a women’s gallery and a narthex. The sculpted decorative motifs originate from the 5th c. basilica and other buildings and this explains their variety; equally interesting are the capitals (5th and 6th c.). The mosaics found on the west side date to the 5th c. while those on the piers around the sanctuary [bema] are later additions. Those depicting the saint among children, flanked by the bishop and the prefect are of great value. In the basement lies the Krypt on the site where Roman public baths used to be. This is the place of martyrdom for Saint Demetrius in 303 or 305. When the 5th c. Church was built, the baths became a place of special worship and the water flowing was believed to be holy. Since 1988 it is an exhibition area for sculptures, capitals, panels, vessels etc, where cultural events also take place. 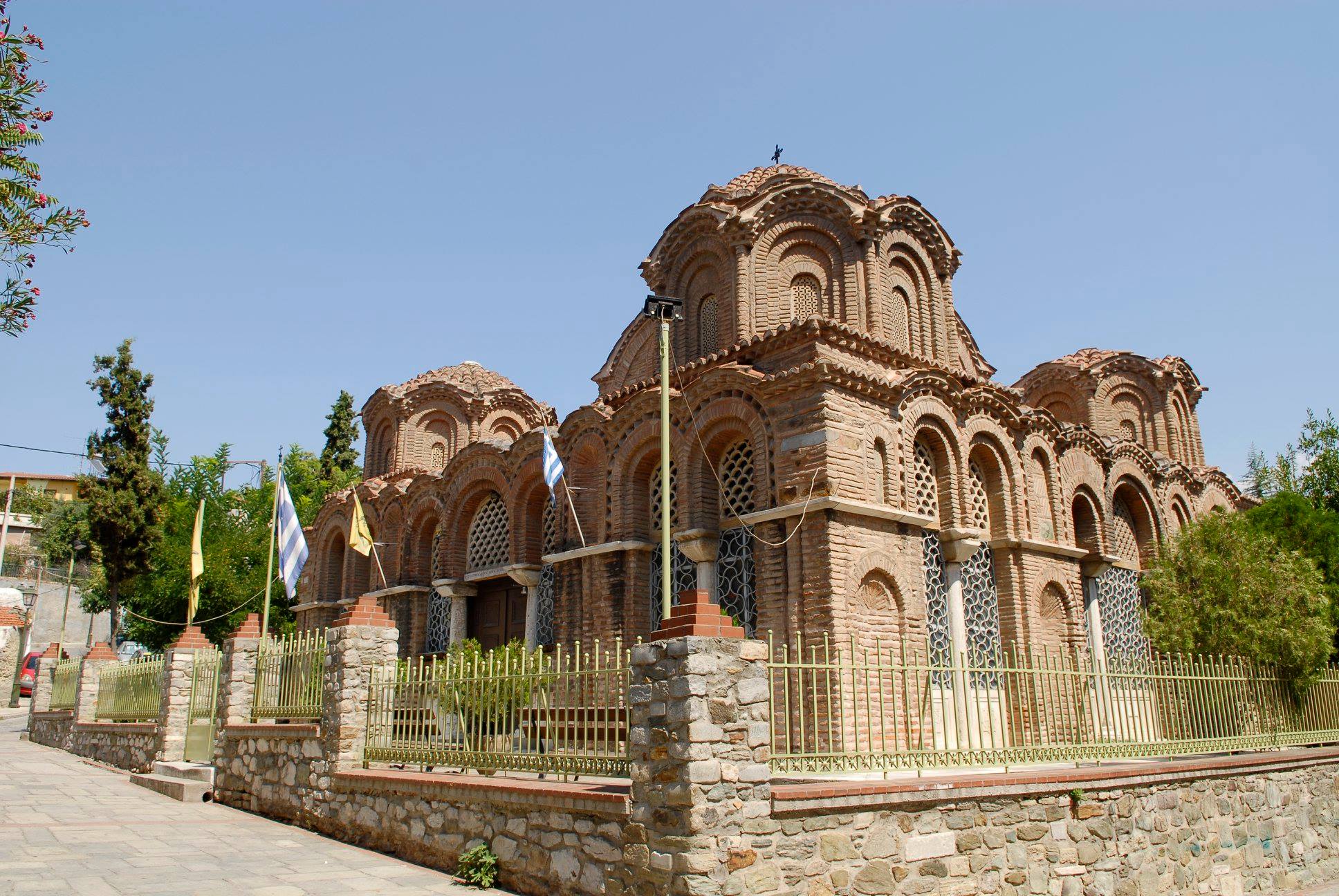 This 14th c. Byzantine church is situated in the centre of Agia Aikaterini town quarter in Ano Poli [Upper City] area. It is a complex tetrastyle inscribed cross-in-square five-domed church with an ambulatory. It bears an elaborate brick-work on the external surfaces and outstanding murals, contemporary to the construction of the edifice, which depict figures of saints, scenes from the Gospel, miracles of Christ etc. During the Ottoman Rule the church was converted into a mosque (Yakup Pasha Camii) and the murals were covered in plaster, to be exposed once again during the restoration works that took place in 1947 – 1951.

This imposing church (late 13th – mid 14th c.) towering over Olympiados st. in the outskirts of Ano Poli is thought to have been the main church of Nea Moni [New Monastery] or Moni Akapniou [Akapniou Monastery]. It was situated in the area of the Byzantine palaces and this is why the Turks had named the area Balat (Palace) and the church Eski Saray Camii (Old Palace Mosque). It is a tetrastyle cross-in-square domed church with features related to the monasterial architecture of Mount Athos. The central dome is supported by granite columns in the shape of a cross, the building’s central part was enlarged by the addition of two conchs [semi-domes] whereas in the west section there is a rectangular cupolaed narthex. The murals (14th c.) depict images of saints and scenes from the life and miracles of Christ. Also, at the junction of Olympiados and Amfilochias Sts. there is a surviving ottoman fountain.

It is located on Romfei Sq. in Ano Poli and it is the only surviving Byzantine bath house, a domed 13th c. building made of brick, which was open to the public until 1940. During the Ottoman period it was named Kule Hamam and was divided in two (male and female section). 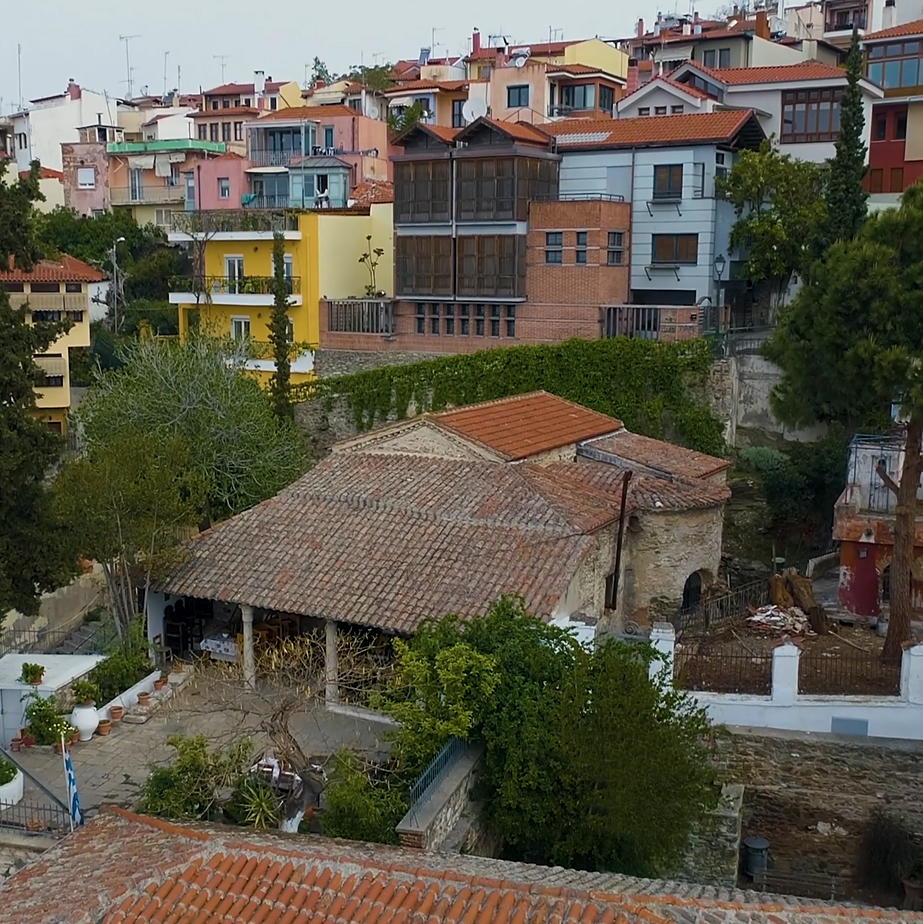 Moni Latomou [Latomou Monastery] has a huge archaeological and historical value, since it is an early type of a cross-in-square domed church. Its construction dates back to the 5th or 6th c. and it is believed to have been built by Theodora, daughter of the Byzantine emperor Maximilianus, who had been baptised a Christian. The monastery was dedicated to Hosios David [Saint David] in 1921. Especially noteworthy are the mosaic depictions on the ceiling which show the Vision of Ezekiel and are contemporary to the construction of the monastery; the later ones of the 12th, 13th and 14th c. are also great art specimens of the Komnenian period. There is a surviving minaret entrance built in the 16th c. when the church was converted into a mosque. The small picturesque yard offers an unobstructed view of the city and the Thermaic gulf.

It is the only Byzantine monastery in the city with an active community. It was founded in the 14th c. by the monks Vlatis (or Vlateus) brothers and was dedicated to Pantocrator Christos [Almighty Christ]. Celebrations take place on the Transfiguration of Christ feast day. Its main church [katholikon] is of the inscribed cross-in-square type but the dome rests on the walls and on two piers instead of columns. It is surrounded by a portico and there are two chapels. Murals were painted during 1360 – 1380 and the 17th c. iconostasis is particularly noteworthy. It is surrounded by a large garden offering a wonderful view of the city and there is also a small peacock farm; in the grounds you will also find the newer buildings of Misirogleios Library, the Patriarchal Foundation for Theological Studies (1968), a space provided for the study of pictorial manuscripts from Mount Athos, a bookstore and a shop

It was built in the 1310s, as a dependency of Vlatadon Monastery and it served as a monastery main church. Within the same grounds there used to be an orphanage at earlier times – hence the name “Orphanos” [meaning Orphan]. It is an aisleless timber-roofed church sided by an ambulatory forming the shape “Π”. The 14th c. murals inside are true masterpieces depicting scenes of Dodekaorto [the Twelve major religious feasts of the year], of the Passion of Christ, the Resurrection and the Liturgical Cycle as well as figures of saints; the monument is considered as one of the best preserved in Thessaloniki. It is surrounded by lush and serene gardens. 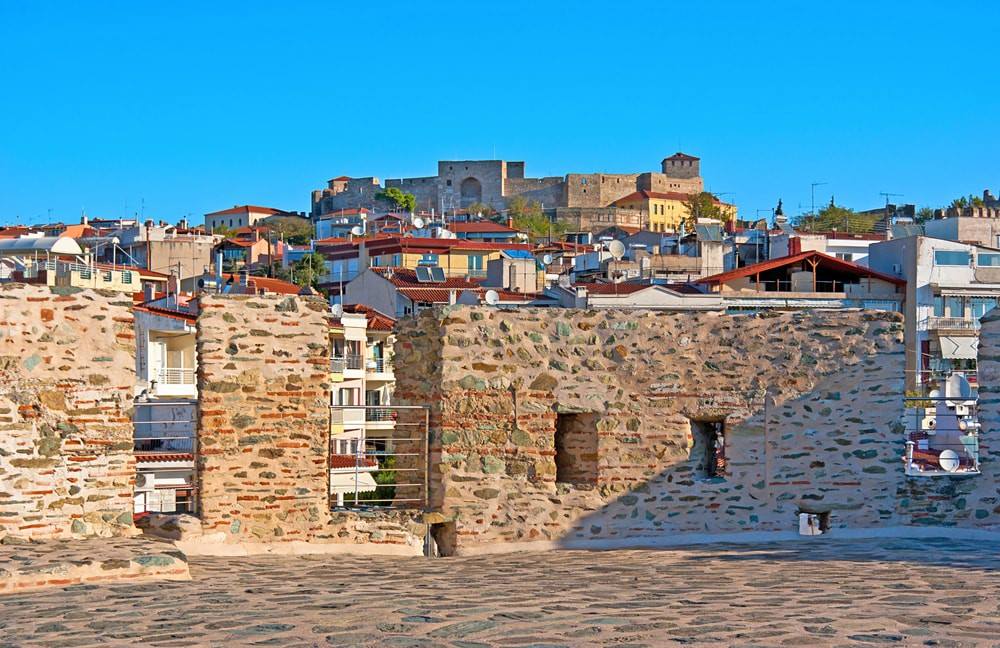 Thessaloniki was walled immediately after it was founded by Cassander; in 390 AD a series of largescale changes took place by Theodosius I. In the Byzantine times a harbour was constructed (in the SW part) and the Acropolis wall was raised. During the Venetian Rule (1st half of the 15th c.) there were efforts to boost it in the light of the Turkish threat; this is why certain scholars support that the Trigoniou Tower and the White Tower were built during that period. In the following centuries, the Turks completed reinforcement works in various places. The wall inscriptions describe the interventions and restorations that took place over time. The walls followed the shape of an irregular trapezium and ended to the west in Vardariou Tower and to the east in the White Tower, reaching a total length of 7 km. After 1870, demolition of the seafront walls as well as of parts of the western and eastern walls began, in order to sanitise the plains and also to expand the city. Today there are 3 remaining km of city walls (mainly on Ano Poli); their height ranges from 8.30 to 10.50 m. and their width may measure up to 4.50 m, making them an impressive monument and one of great archaeological and cultural value.

*Note: To get a complete picture of the town’s Byzantine art monuments make sure you visit the Museum of Byzantine Culture