Thessaloniki’s Old Town is full of atmosphere. It covers the area in between the city walls (to the north and east) and Olympiados Street (to the south), and has had the luck to remain untouched by the 1917 great fire. It was virtually uninhabited until the mid-15th century, when it was conquered by the Ottomans who selected it for settlement on account of its fine climate, panoramic views and strategic position. The two and three-storey houses bear mixed Macedonian and Ottoman architectural elements; there are also residences with neoclassical and eclectic style motifs where the Dönmeh lived, i.e., converts to Islam who secretly remained Jews. After 1922 many refugees settled in the area. Despite the construction of newer buildings and the opening up of new streets in recent decades, it has kept its original town planning, to a large extent, with narrow alleys and scant squares, as well as its original architectural features, particularly in the west and east part of the town. This particular atmosphere has lured intellects, artists and students who chose it for settlement in recent years.

This 14th c. Byzantine church is situated in the centre of Agia Aikaterini town quarter in Ano Poli [Upper City] area. It is a complex tetrastyle inscribed cross-in-square five-domed church with an ambulatory. It bears an elaborate brick-work on the external surfaces and outstanding murals, contemporary to the construction of the edifice, which depict figures of saints, scenes from the Gospel, miracles of Christ etc. During the Ottoman Rule the church was converted into a mosque (Yakup Pasha Camii) and the murals were covered in plaster, to be exposed once again during the restoration works that took place in 1947 – 1951.

This area was named after the plane tree which was planted there in the early 20th c. (çınar is turkish for plane tree). You can reach it through Al. Papadopoulou Street, one of Ano Poli’s hallmark areas as are Tsamadou, Sachtouri and Isminis Streets. In Isminis Street you will find the House of Pontian Greeks. This is Ano Poli’s downtown spot and people who want to reach the neighbouring Sykies area go through here. In the centre, there is an ottoman fountain with a marble Roman sarcophagus; this is also where you will find the oldest restaurant in town (open since 1885), a café and small shops.

Take a good look at the remarkable listed buildings and the more recent ones as you walk along Pileos Street and head for Terpsithea Square. The buildings surrounding the square are amazing and offer a wonderful view of the town and the seafront; in the centre there is a playground and a small open-air theatre. Another impressive monument is the Tϋrbe (Tomb) of Musha Baba (1543), one of the late ottoman monuments of Thessaloniki, shaped as an octagon with decorative pointed frames on windows and an once lead-covered dome.

This is Ano Poli’s central square. To reach it, take Theofilou Street where the neoclassical building housing the Vice-Mayor’s office for Culture is located. In the square, you will see a Byzantine bath-house known as Koule Kafe; the entire area has been named after it. On the NE side of the square (7, Krispou st.) you will notice the architectural masterpiece of a 19th c. neoclassical building which houses the municipal Library of Ano Poli. On Theotokopoulou Street, near the square lies the 14th c. Byzantine church of the Taxiarchs [Archangels] which used to be a monastery katholikon [main church] and has undergone later changes.

This small square with beautiful, well-tended houses is located in between Moni Vlatadon and Hosios David where you can go if you take Timotheou Street (notice the ottoman fountain) and Dimitriou Poliorkitou Street. In the square centre you will see the bust of V. Tsitsanis (1915 – 1984) a leading Greek popular composer who lived and worked in the town during World War II.

This is one of the most interesting roads of Ano Poli quarter. It follows the interior line of the northern city walls which used to be the ramparts of the Acropolis. It is worth taking a walk from the corner of Eptapyrgiou and Palamidiou Streets (to the west) where the 3rd Gate is - also known as “Eski Delik” – and head for the main Gate. Besides the interesting traditional buildings and the deserted Zihne Camii [Mosque] (1902) you will pass by the old refugee houses called “kastroplikta”; these were built along the line of the city walls or adjoining them – as far back as the early 1920’s. Similar houses can be seen also on the eastern and western walls.

It is the only Byzantine monastery in the city with an active community. It was founded in the 14th c. by the monks Vlatis (or Vlateus) brothers and was dedicated to Pantocrator Christos [Almighty Christ]. Celebrations take place on the Transfiguration of Christ feast day. Its main church [katholikon] is of the inscribed cross-in-square type but the dome rests on the walls and on two piers instead of columns. It is surrounded by a portico and there are two chapels. Murals were painted during 1360 – 1380 and the 17th c. iconostasis is particularly noteworthy. It is surrounded by a large garden offering a wonderful view of the city and there is also a small peacock farm; in the grounds you will also find the newer buildings of Misirogleios Library, the Patriarchal Foundation for Theological Studies (1968), a space provided for the study of pictorial manuscripts from Mount Athos, a bookstore and a shop 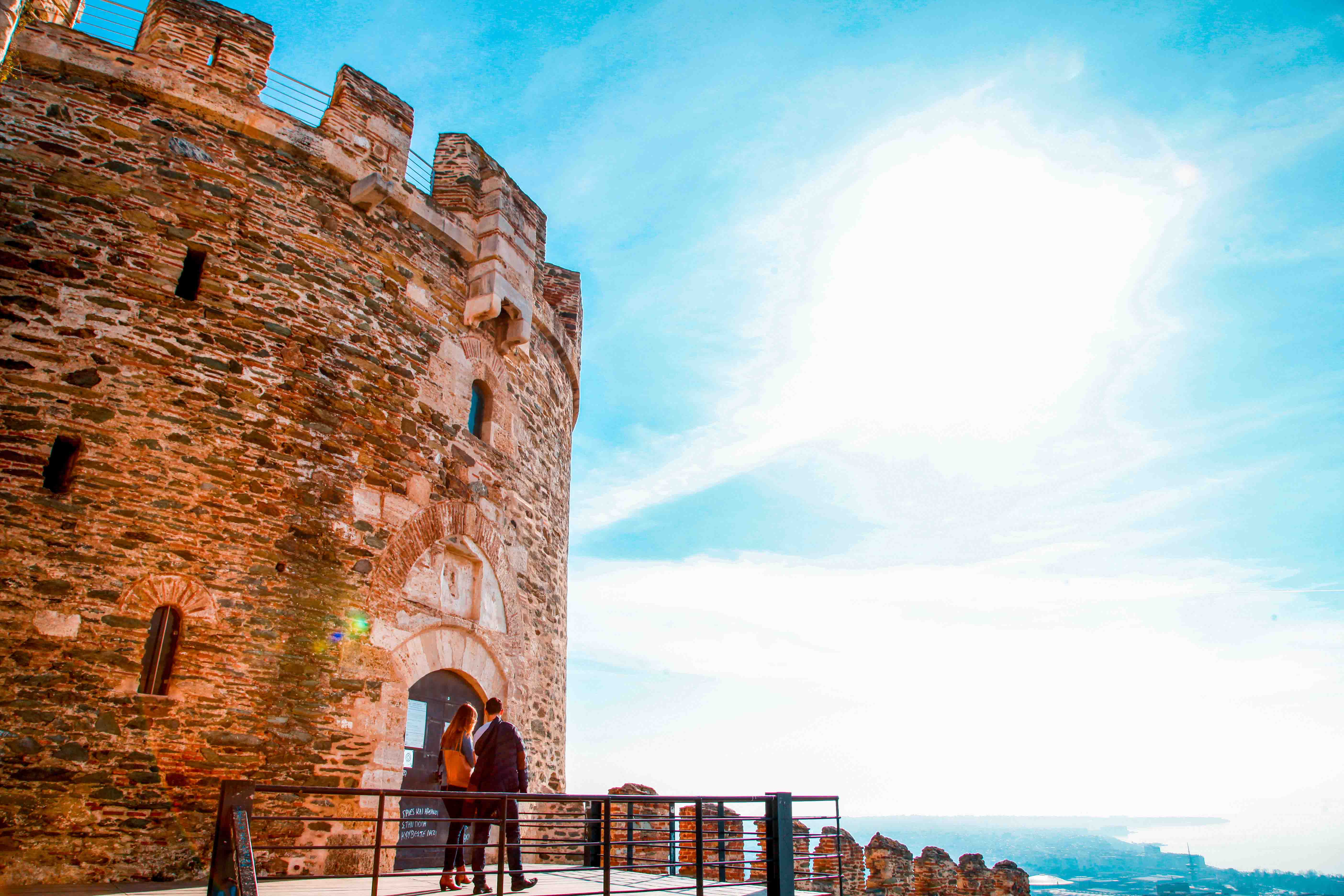 Also known as Alyseos [Chain] Tower, this building stands on the spot where the north and east walls meet. It was built in the 16th c. possibly in the place of an earlier tower dating to the Venetian period; the White Tower, Vardariou Tower and Trigoniou Tower formed part of the construction works completed by the Turks for the fortification of Thessaloniki. Known as Kastra [meaning Towers], this is a popular sightseeing area for locals and visitors alike since the view of the eastern walls as well as of the entire city is breathtaking from this location.

This is one of the two main gates (the other one is Eski Delik) on the northern city walls. Near the gates, the construction of the walls was done particularly carefully and many spots were decorated with ceramics, inscriptions etc which can be seen best from Polydorou Street. This location is a very busy road junction and you will find tourist shops and tavernas nearby.

This impressive fortified area is situated on the NE end of the city walls, within the acropolis - one of the few remaining citadels that are still populated worldwide. To get there from Portara, follow Polydorou Street, alongside the northern walls and then take Gialourou and Erasmou Streets. Eptapyrgio was built in the 12th c., presumably on an older 9th c. fortress and took this name as at first there were seven towers there. The current structure includes ten towers and a small street that goes around it. The north side used to be a part of the city’s Early Christian walls, whereas the towers on the south side were added during the Byzantine period. In 1431, the Ottoman Turks made certain modifications to them, according to an inscription placed above the entrance. Circa 1890 the construction was changed in order to house long-term convicts and newer buildings were added on the inside as well as on the outside area. In 1989, the prison, known by its Turkish name – Yedi Kule, was housed elsewhere and the fortress became a monument open to visitors. It is well worth crossing the ring dirt road of the fortress where an early Christian cistern remains as well as parts of an early Christian basilica - the spot affords a lovely view!

To reach Trigoniou Tower, you will go past the picturesque Agioi Anargyroi square, under a blanket of plane trees, where you will see Agioi Anargyroi church and small, traditional caffés and restaurants. This is the location of the double gate of Anna Palaiologina (the one lying west is also called Gate of Agioi Anargyroi), constructed by the Byzantine empress in 1355, during her stay in the city.

GARDENS OF THE PASHA 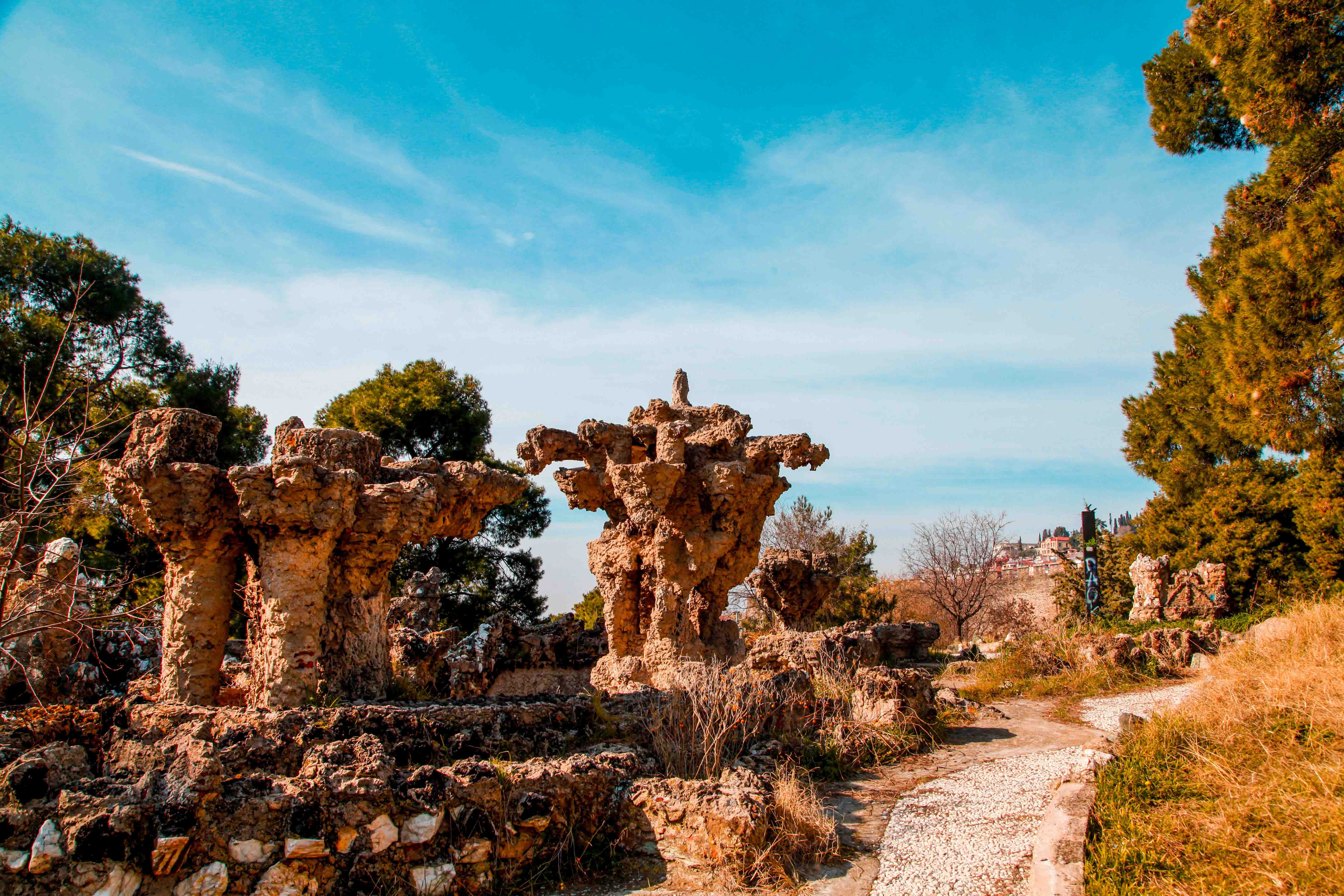 They were built in 1904 by an unknown architect and are the only specimen of eccentric architecture in town. They cover a 1000 m2 area, the decorations are quite peculiar and they include an art nouveau fountain which is no longer functional. At the far end lies Agios Pavlos [Saint Paul] church in the area by the same name. According to the legend it was named after the fountain where Apostle Paul drank water during his stay in town.

Evangelistria is a privileged area in the city centre, thanks to its low buildings and ample green spaces. This is the location of the city’s oldest Christian cemetery created in 1875 by the Charity Brotherhood; some of the greatest personalities of Thessaloniki were buried here. On the opposite side (on El. Zografou Street) you will see the Armenian and Protestant cemetery as well as the machine works / foundry of E. Axylithiotis, which closed down in 1990 and is now a historic monument, used as a venue for cultural events. The New Golden Gate used to be at the corner of Agiou Dimitriou and Olympiados Streets and it was one of the central gates of the eastern walls which were demolished to make way for the opening up of two roads (very few segments remain). Opposite the cemetery you will spot the neoclassical building of G. Gennimatas hospital.

It was built in the 1310s, as a dependency of Vlatadon Monastery and it served as a monastery main church. Within the same grounds there used to be an orphanage at earlier times – hence the name “Orphanos” [meaning Orphan]. It is an aisleless timber-roofed church sided by an ambulatory forming the shape “Π”. The 14th c. murals inside are true masterpieces depicting scenes of Dodekaorto [the Twelve major religious feasts of the year], of the Passion of Christ, the Resurrection and the Liturgical Cycle as well as figures of saints; the monument is considered as one of the best preserved in Thessaloniki. It is surrounded by lush and serene gardens.

Take Olympiados and Ap. Pavlou Streets to reach the picturesque Kallitheas Square (with a small playground) in Ano Poli, where major streets begin, such as Irodotou, Andokidou and Gorgous. The last street will lead you out of the city walls. The Children’s Museum of Thessaloniki was housed in one of the street’s traditional buildings until 2009.

The Seich Sou forest (the spring of the Sheikh) or Cedar Hill or Thousand Trees is the biggest forested area bordering the city, covering a 3,000 hectare area. Only a small section of the old oak forest remains in Kouri area as a result of the exploitation that occurred during the Byzantine period. Today’s landscape is the result of systematic reforestation that took place in the 1930’s. Despite the spreading of the adjacent suburbs and the 1997 big fire, it remains a particularly popular destination for Thessalonians who come here to enjoy hiking, mountain biking and other sports, picnicking or just to drink in the lovely view